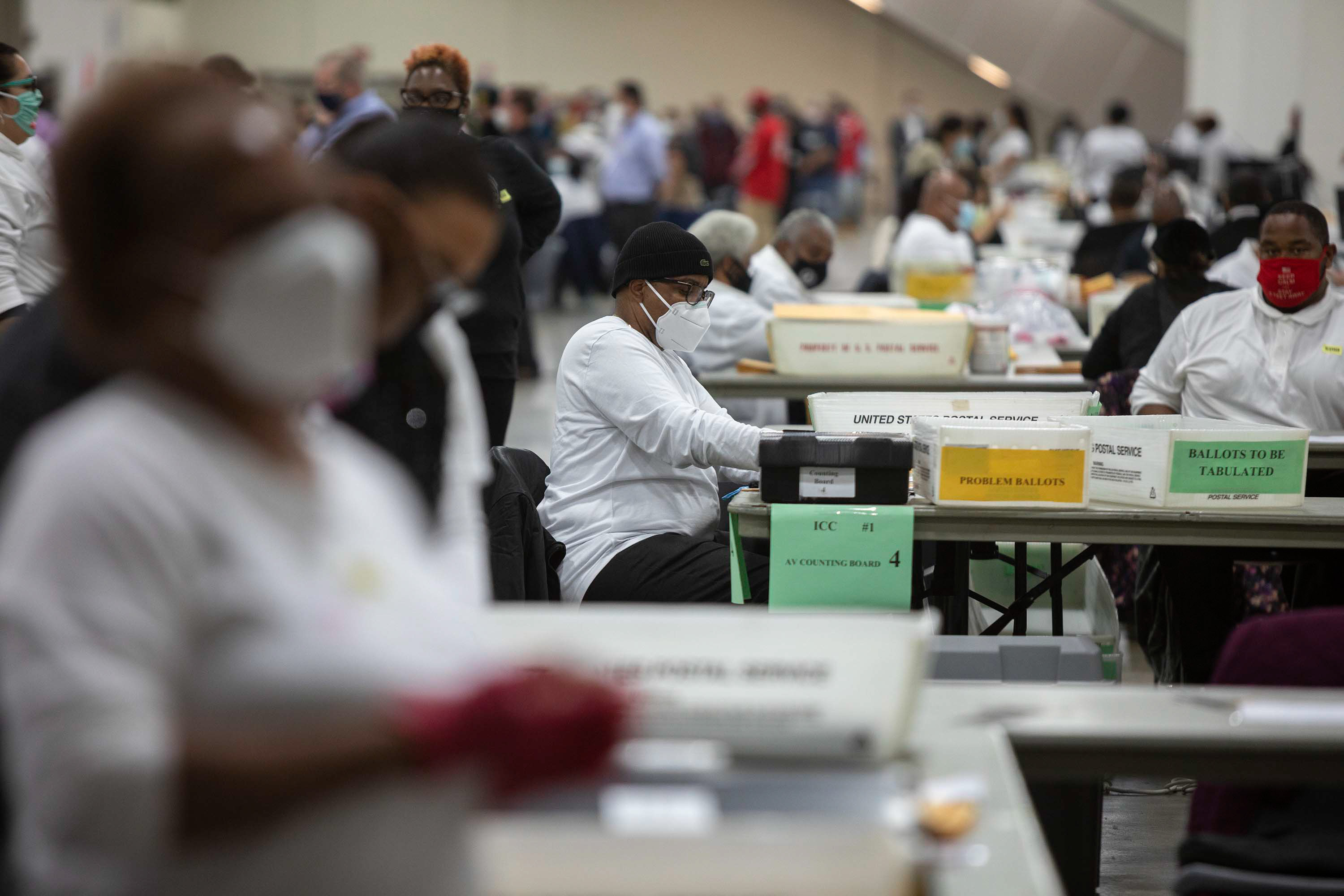 Certification is usually a formality, but President Donald Trump is trying to block or delay the process in key states as part of a long-shot effort to overturn the election that he lost to President-elect Joe Biden.

All eyes have been on Michigan this week after Trump called two Republican canvass board members from Wayne County to offer his support, after they went back and forth on voting to certify the election results from the state’s largest county, which includes Detroit. The board members filed affidavits Wednesday seeking to “rescind” their votes to certify the election result.

On Friday, leaders from the state’s GOP legislature met with Trump at the White House, but contrary to the baseless claims of fraud the President and his allies have been peddling, they said they “have not yet been made aware of any information that would change the outcome of the election in Michigan.” Biden leads Trump by more than 154,000 votes in the state.

Monday is the day when the Michigan State Board of Canvassers is scheduled to meet to certify those results. The board’s certification of election results is what triggers electors to be selected, which is what gets sent to the Electoral College.

The Michigan State Board of Canvassers is made up of two Democrats and two Republicans. The members are appointed by the governor “with the advice and consent of the Senate,” according to the law.

What the board can and cannot do

The role of the board is very narrow and limited. It is to canvass and certify election results. Michigan election law experts told reporters on a press call Friday that the language of the law, which states that the board “shall canvass the returns,” is key to understanding the requirements of the board.

“That’s a mandatory requirement,” John Pirich, a former assistant attorney general to the state of Michigan and current law professor at Michigan State University, said when explaining the laws that govern the board.

“The Michigan Supreme Court has been very clear that ‘shall’ means ‘shall.’ It’s mandatory. It’s ministerial. They have no choice,” said Mark Brewer, the longest serving chair of the Michigan Democratic Party and an attorney at the lawfirm Goodman Acker.

The board cannot ask for an audit prior to certification, according to Michigan law.

“It’s clear. It says after certification, and it’s not to be used for recounts or certification issues,” Pirich said, referring to the law.

One of the Republican board members told the Washington Post he was considering an audit.

“I do think with all of the potential problems, if any of them are true, an audit is appropriate,” Norman Shinkle said. CNN has reached out to Shinkle multiple times for comment. CNN has also not received responses from the other board members.

The board cannot try to certify part of the results for the state and not all of it, as was suggested by the Republican chair of the Wayne County Board of Canvassers at their certification meeting, which received a lot of pushback at the time.

“Historically, the board has always unanimously certified on that day,” Brewer said.

What happens if there is a 2-2 deadlock?

If the board becomes locked in a 2-2 partisan deadlock, like what initially happened with the Wayne County Board of Canvassers on Tuesday, two parallel processes can occur.

Steve Liedel, the chief legal counsel for former Gov. Jennifer Granholm, said this kind of deadlock has happened before, but mainly over ballot proposals.

The first avenue to force certification is through the courts. If the board fails to certify on November 23, the Michigan Court of Appeals will order the board to certify. Liedel said the court has proceeded with contempt proceedings in the past for members of the board failing to certify and that board members refusing to certify could be charged with a misdemeanor or willful neglect of duty. If the issue is not resolved by the Court of Appeals it would go to the Michigan Supreme Court, but Michigan election lawyers agreed Friday that it going to that level is unlikely.

At the same time, Gov. Gretchen Whitmer, a Democrat, has the power to remove and replace any board member, according to Michigan law, and can act without waiting for a court or anyone else. This would be a very politically complicated move for Whitmer to pursue.

When asked if Whitmer was prepared to step in if board members refuse to certify, her press secretary Tiffany Brown told CNN, “We’re not to that point and hope individuals will do the right thing and respect the will of the voters.”

If a board member fails to show up, the board can still act as long as a member from each party is present. If there is more than one vacancy, the governor fills the vacancy.

Can the legislature get involved and appoint their own electors?

The short answer, according to Michigan election experts, is no.

Even if the State Board of Canvassers refuses to certify results and the issue goes to the courts and Whitmer potentially steps in, Michigan election lawyers explained that the legislature cannot try to appoint their own electors.

“You can look through the entire Michigan election code that was written by the legislature and signed by governors of both parties. There is no role for the legislature in this process,” Brewer said.

“Michigan has a pretty strong separation of powers clause. And appointing members of the Electoral College is not legislating, it’s not passing a law. And there’s nothing in the Michigan Constitution that would authorize the legislature to do that,” Liedel said.

Liedel added that the only thing the legislature could do in this regard is to try a pass a bill, which would change the law, but that would require the governor’s signature.

Both parties adopted their slate of electors at their respective fall conventions.

Can certification votes be rescinded?

The same is true at the state level. Once the board certifies the results, the meeting is adjourned. To recall votes, the board would have to call another meeting, but Michigan election experts said Friday that would not happen.